How is it possible to grow endlessly in a closed system like our planet?

How long can we still go on wasting non-renewable resources?

Hasn’t the planet maybe begun to show us the first symptoms of its intolerance?

Is it morally and ethically fair to leave the task to future generations?

Can the market and the mechanism supply-demand answer our health and evironmental needs?

Somebody maintains that climate changes are cyclical and they do not depend on human activities, but isn’t it more correct to assert that the planet has never been so crowded before, the well-being so widespread and unfortunately obtained to the detriment of the environment?

Is it possible to go on entrusting the air, water and ground quality, also called “the triangle of life”, to consumers and farmers, who are not always aware of the consequences of their choices?

Given the alarms launched by almost all scientists, isn’t it high time each of us began to do something more to contrast or to remove the notorious “point of no return”?

At today’s rate of consumption, we are burning more resources than our planet can regenerate every year. The coefficient is between 1.4 and 1.7; therefore, we would need 1.4 or 1.7 planets to be able to sustain this rhythm. Agriculture, with forestry and other farming uses, today is responsible for 24% emissions which alter the climate. 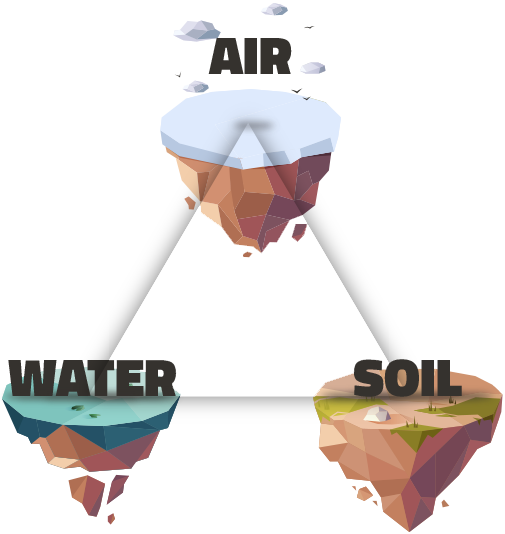 “The soil is a great connector of our life,

the source and destination of all of us”

In the past the soil was considered a living organism. Now it has become an element to exploit. We have no longer adapted ourselves to nature and its time, but we have tried to revolutionize it.
Traditional farming practices are damaging this vital resource, which houses a quarter of the planet’s biodiversity. The exploitation of the soil, the lack of a rotation of cultivations and inappropriate inputs have caused 30% loss of our soil over the last 150 years: an erosion which has caused numerous vital species to disappear and which increases climate changes.

A healthy soil actually has the ability to hold CO2, which would otherwise be dispersed in the atmosphere in the form of emissions.
A healthy soil and in particular its first gold centimetres of depth retain the organic substance which generates life.
A healthy soil holds water reducing its corrivation time thanks to a higher capacity of absorption, participating in the washing away and in desertification.
A healthy soil preserves the sea heritage from the phenomenon of eutrophication, the pollution of water due to the overabundance of nitrates and phosphates.
Nowadays, the state of farming soils is in widespread dramatic conditions, both in the physical and chemical state. This is demonstrated by the systematic presence of substances harmful for our organism and by the nutritional shortage in food, which become more and more deprived of their components, including flavour.
Noxious substances have an impact on the organisms we want to contrast, but at the same time they damage the physical and chemical properties of the soils, the whole ecosystems and public health.

It is clearer and clearer and more and more evident indeed the relationship between soil, food and health. Food can act in a preventive or destructive manner on our organism: there is indeed an association, scientifically supported, between contamination through pesticides and neurodegenerative diseases.
Our diets are no longer adequate to what is good for us and for the planet and they represent the main cause of climate changes and of the loss of biodiversity.

“Let food be your medicine and

let medicine be your food”