REGENERATE THE AREAS STARTING FROM THE SOIL. ALDO BONOMI’S SPIRIT OF SMART LAND

A research, carried out by prof. Aldo Bonomi and by the AASTER Consortium, has investigated the agricultural sector of Jesi Valley and of some territories nearby, in the centre of the Marches, to understand if the entrepreneurs of the area and the local communities were willing to adopt large scale actions which enabled to regenerate the area and the natural capital through good practices of land management and of animal breeding. AASTER’s study, besides reconnoitering the main actors of this farm economy, has been able to diffuse ARCA ideas and principles and to test, with targeted focus groups, if the territory was ready to challenge a model of development and growth that has no equals in Italy. The result of the research has been positive, as there has been a great interest by public and private stakeholders in applying to local agriculture cultivation methodologies and scientific knowledge compatible with environmental and social sustainability.

The objective of the research was to activate processes of animation of communities and to develop the fundamental role of farming and of the farmer in a context of local regeneration.

ARCA wants to share the result of this research, which has highlighted the force of the common values which link us to our area: hard work, the care of the landscape, the scientific interest, the value of the land, the responsibility of its care, the need to create a culture of regeneration for the person’s and the planet’s well-being. 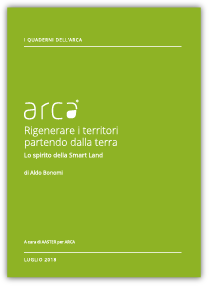 THE STATE OF THE ART OF THE ARCA PROJECTS AND EXPERIMENTATIONS

ARCA is actively collaborating with the Rodale Institute, the real forerunner and experimenter of bio-preservative techniques with which, together with Universities and Italian Research Centres, it is transferring and adapting those agronomic techniques to our hilly areas.

The proposal of ARCA, official partner of the Global Soil Partnership, is materialized in the ARCA Regenerative Soil System, a system of agronomic technologies and practices which can be utilized by farmers and guaranteed by ARCA, specifically studied to farm and respect the frail and difficult hilly areas.

DISCOVER THE OFFICIAL DOCUMENT OF THE GLOBAL SOIL PARTNERSHIP

The “Global Symposium of Soil Erosion” 2019, organized by ONU for supply and agriculture (FAO) on the theme “Let’s stop soil erosion, let’s protect our future”, was the opportunity to present a prototype of measurement for the erosion of the soil.

This prototype, developed within the project called “Transfer and adaptation of the agricultural, biological preservative model in the Marches farming systems”, has been financed by the Marche Region through the Marches PSR 2014/2020 Measure 16.1 – Action 2 and was born from the consideration that lots of farming soils of the Marches are subject to a serious erosion due to the geomorphological features of the land, to the climate conditions and to the depletion of the organic substance of the soil, caused by a non-correct management of the soil, which has favoured the mineralisation and the increase of CO2. 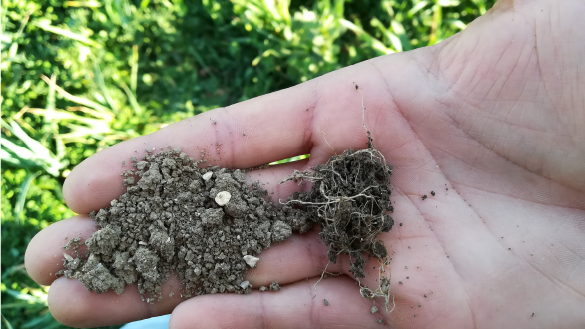 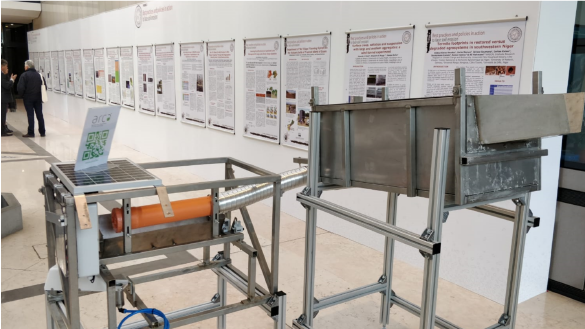 The proposal of the project, based on the principles developed by ARCA Benefit, creator of a model of farming designed to the regeneration of the soils, of the environment and of the area, is coordinated by the leader of the Agricultural Biological Company Fileni of the Fileni Group in collaboration with the Polytechnic University of the Marches, AEA Ltd. of the Loccioni Group and the Agriblu Company.

The objective is exactly to mitigate the present deterioration of the soils of the Marches, keeping and improving their functionality, their biodiversity and the ecosystem services through the transfer and adaptation from other productive realities of agricultural preservative techniques and technologies (famous as bio-preservative farming) to be applied to crop systems in biological farming in the Marches, especially on the most present rotating arable elements.

For this reason, within the project presented to the Region, a system prototype for the objective measurement of the soil erosion has been developed, obtained thanks to the scientific skills of the Agricultural Food and Environmental Science Department of the Polytechnical University of the Marches and of those of an engineering type of the partner AEA Ltd. of the Loccioni Group.

The prototype is made with a mobile device applicable to different soils and geomorphological situations and it’s provided with a maze suitable to intercept and separate the debris in the drain water after every rainfall; these debris are then collected manually from the collecting bathtub to be weighed. At the same time, filtered water is conveyed into the device of the “flow metre”, formed by a tipping basket which, thanks to an eccentric fixing, periodically drains a fixed and known quantity of water. A little quantity of water is regularly withdrawn which is then analyzed in a lab to determine the substances melted in it.

A data logger is connected to the system just described, which counts the overturning of the bowl (and so the water flow rate) and sends them through a radio signal to a concentrator. Combining the information produced by the erosion sensor and that of the intensity of a rainfall, obtained from a meteorological control unit already present in the area, it’s possible to demonstrate the water balance of experimental fields.

ARCA is experimenting a replicable model unique in the world concerning an overall and systemic view of a drainage basin.
ARCA experience can be adapted on compatible hilly areas setting the conditions for a widespread process.

The ARCA focus is the committment of farmers in the certification, training, development and promotion of techniques of bio-preservative farming, that is a biological agriculture which employs techniques of soil preservation to regenerate it. 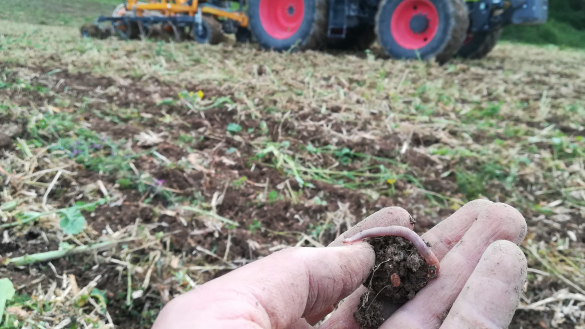 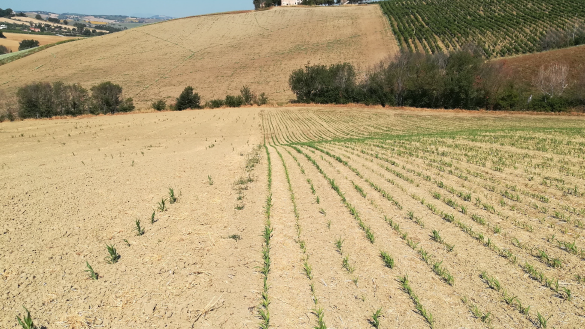 The reference area is characterized by all those drainage basins which, thanks to their geomorphological structure, represent measurable and traceable ecosystems.
The farms with an average surface of 10-12 hectares, and 2 of them employed, perfectly follow the agricultural pattern of inland areas, where the creation of supply chains becomes indispensible for the development of an agricultural economy grounded, first of all, on the guarantee of a fair income for the farmer and on the will to regenerate the soil and the environment.

ARCA techniques and experimentations provide a series of ecosystem services the Community should be ready to recognize at all levels (economic, social, environmental). The ecosystem services are useful to farmers, people and the whole community.

An example of fundamental ecosystem service is Carbon Farming, the capacity of a soil, farmed with bio-preservative regenerative techniques, to hold carbon in order to capture the excess carbon dioxide in the atmosphere, re-introducing it into the soil.
ARCA is provided with experimental labs in farms, committed in measuring the environmental parametres and in experimenting agronomic techniques designed to the regeneration of the soil.

ARCA is experimenting an ad-hoc automation (loosener), which enables a minimal processing of the soil to allow rainwater to accumulate in the soil’s twists and turns and the air to ventilate it in order to regenerate its organic substance, unlike what happens with the traditional plowing technique.

ARCA is sowing some cover crops herbaceous mixes. They cover the soil, leaving farming remains on the surface, allowing a biological check of weeds, protecting it from erosion and runoff caused by intense rainfall, besides increasing the amount of nitrogen and organic substance. In Spring we see developed, luxuriant and blooming cover crops.

ARCA has experimented a machine suitable to direct sowing on a non-operated soil, which has also the function of mechanical devitalization of the infesting species. ARCA, with such a combined seeder, sows both cover crops and cash crops.

ARCA has developed the instrument of measurement to estimate the parametres of the productive cycle.

The several passages are marked by blockchain systems to guarantee transparence, safety and traceability and to propose a healthy, quality product coming from sustainable energies, which encourages the regeneration of the soil and of circular economy.

The instruments of measurement are:
– Prototype for measuring the soil’s erosion (qualitative and quantitative analysis);
– Physical, chemical and biological analysis of soils through public and private labs;
– Analysis on soil and vegetable samples of the remains of the possible use of synthetic chemistry (pesticides, herbicides, insecticides and fertilizers) effected by internal and external labs;
– Field test by agronomers;
– Monitoring of organic carbon.

ARCA IS WORKING TO:

– Establish one or more organizations for the care of the farming and environmental step, which contractually interact with a Public Company all the project stakeholders take part in, including farmers and final utilizers, with the option of turning to crowfunding. This organization will have to deal also with the control of productive supply chains and will have to certify them, defining the look, the communication and the selling, even online, of products.

– Create the several productive regulations for the development of agricultural and food excellence supply chains and for the transformation and distribution of the products.

– Certify and track all the various steps with the blockchain technology.

– Pick all the innovations of processing and of product compatible with the ARCA principles emerging in the food sector.

– Finalize the range of products to offer choosing among regional excellences.

– Define a proper look and establish the most suitable ways to educate and reach the market segments most suited to the purchase of future ARCA products.

– Select the selling channels in line with ARCA offer.

THE CONTRACTS OF RIVER

The Contract of River is a legal protocol for the environmental regeneration of the drainage basin of a waterway.

The Contract of River allows a shared approach to the planning of the territory going beyond the administrative limit and adopting a river basin as a criterion of local identification. It is a set of rules in which public benefit, economic profit, social value and environmental care intervene in an olistic way in the search and in the application of solutions effective for the upgrading of a specific area.

Currently, ARCA is subscribing to the Contracts of River and is participating in related worktables in the river basins of the Upper Potenza, of the Esino, of the Fiastrone Lake of Fiastra, of the Foglia, of the Misa-Nevola, of the Musone and
the Tesino.

This has aroused the concern of the Marches Consortium of Remediation, which also subscribes to the Contracts of River, which has been integrated in a work group created by ARCA for the processing and presentation of a European research project in collaboration with the Marche Region Observatory of the Soils of Treja, the Universities of Ancona, Camerino and Udine, the Assam, the Fileni Farm, the Loccioni Lov Farm.

THE CONTRACT OF RIVER

ARCA, within the Programme of Marches Rural Development, is experimenting new systems of viticulture. The title of the Project is New Wineyard, with the Cantori Roberto Farm as leader.

ARCA is starting a collaboration with the University of Perugia to create ARCA Umbria on the Lake of Trasimeno. The project aims at measuring the improving effects of bio-preservative regenerative farming practices in any ideal context, as a well-defined limited-dimension basin.

ARCA is also very active on the area, having supported:
– An Agricultural and Environmental Agreement measure Water Protection, including a range of municipalities which goes from Apiro to Arcevia and with the Union of the Towns of the Middle Esino Valley as leader.
– Two Agricultural and Environmental Agreements measure Soil Protection, Prevention of Hydrogeological Instability and Floods: the former having Castelplanio as leader and comprising also the towns of Rosora and Poggio S. Marcello; the latter having Apiro as leader, including also Poggio S. Vicino.

In the process of rating with the GAL Jesi Hills S. Vicino the project of relaunch of the native poultry race called Ancona, with the Biological Farm Company Fileni as leader, for the recovery of the animal biodiversity and the related innovative strategies for the development of the high quality of agricultural and food culture.